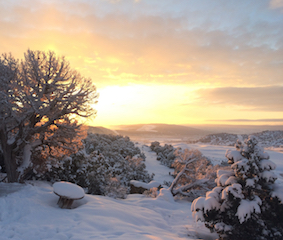 We, at Blue Crystal Mines, feel very fortunate to live and work in this magnificent place. We are surrounded with incredible landscapes, wildlife and we have the opportunity to extract amazing stones and minerals from the mining area. Mining can be a very destructive practice, specially when it is done on a large scale as it was originally at this copper mine many years ago. We are not interested in extracting the copper, rather we are going after the beautiful stones and minerals. In large scale copper mining these stones are usually destroyed. While we do use some large equipment from time to time, most of our work is done by hand. In order to get the highest quality stones and specimens they have to be very carefully extracted by hand, cleaned with water (never with chemicals) and then wrapped and stored in a manner that best protects the individual specimens. This way we maintain the full beauty that mother nature shared with us. To live and work here is the real treasure for us and like with any treasure that one values it needs to be well taken care of. For us this applies to both the land and to every stone and mineral we extract.

William Harrison started Blue Crystal Mines with a lease on the Copper Basin property in Arizona, which was owned by the Phelps Dodge corporation. The business was named Blue Crystal Mines because William had always dreamed of someday finding crystal Azurite . That did not happen in the Copper Basin area and there was not enough material coming out to supply the market. This is when La Sal Azurite entered into the picture. That year at the Denver Rock and Mineral Show William bought some La Sal Azurite from Bob Lane and Graham Sutton. A little latter they contacted him about getting involved in a business deal with the La Sal property to which William said yes. Soon Bob and Graham secured the agreement with the property owner and William agreed to help finance the opening. This went on for a year. William was repaid his investment in material as agreed. Then Bob and Graham continued on their own. William still bought material from them until they said it was all gone and gave up. A couple years later William found out some other people were working that area and he contacted Steve Kosanke, the owner of the property, about leasing the property. At first Steve told William that he would never again be willing to lease the property but eventually after a few years Steve said he would be willing to sell it to William. Finally, they met and secured the deal.

This was in 1997. William really had to scramble and borrow to come up with the funds for this property. At first he planned to just go to the property a couple times a year to supplement his Azurite production in Arizona. However, he soon found out people were trespassing and stealing material, even with it being posted no trespassing, and the Copper Basin started showing much less material so William decided to move to the property to keep production going. Investing in this property was a real gamble. There were no utilities or structures on the property and at that time William was very tight on money. For

years William lived on the property in a motor home, used a generator and hauled water for his operation. It did not take long to work out the little material that was showing, just a couple months. Then William noticed the tailings others left behind had a lot of material that was useable so he started designing a separating operation with used equipment to do what was needed. For many years most of the material coming out of the mine was actually coming out of the previously mined tailings. The dream of finding Blue Crystals is what really kept William going. The progress in La Sal went very slow due to finances and limited equipment for locating a new area. Most of the time he would have to supplement with other work to keep funding the operation.. He found only tracer veins and very little material other than in the tailings. In 2003 Ekaterina joined William in his adventures. In 2011 William and Ekaterina, decided to invest in opening up a new area at the mine. The veins started out small, but eventually turned out exquisite material, including beautiful druse crystal formation. Finally the dream of Blue Crystal Mines was really coming alive. That Year William and Ekaterina decided to start taking the Azurite to the major rock and Gem shows again.

Over the years William and Ekaterina continued to work and improve the property and when an area is finished it is covered in and reshaped to cover in dangerous areas and to improve the looks of the property. Then it is replanted. William and Ekaterina say “This is not only our work space, we also live here. This is a beautiful place and we will not leave a mess like it was when it was bought. Over the years we have done and continue to do our best to take care of the damage that was left behind from the previous mining operations as good as we can and as finances permit it. There was a lot of damage that was just left behind from before.

In 2019 Ekaterina Tatarovich decided to leave Blue Crystal Mines, so she could dedicate more of her time to her business Sculpture Adventure Studios. We are truly grateful for everything Ekaterina has contributed to Blue Crystal Mines over the years, including making lots of beautiful artwork and functional items out of our azurite, developing this website, and helping to shape the vision for what Blue Crystal Mines has become. We wish her the greatest success in all her creative endevours. We would encourage you to visit her website Sculpture Adventure and Facebook page Sculpture Adventure Studios to see some of her fine art and functional art, including custom railings. Ekaterina will still  help us out occasionally and will continue to create beautiful items for us to sell in our showroom and shows. 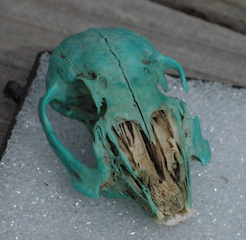 Before Blue Crystal Mines moved to La Sal, the area has been known by several different names including Big Indian Mine, Blue Grotto, Blue Jay and Keystone/ Wallace. This mine has had a very interesting history. At one point it was a copper mine. Human skeletons, that started to be replaced with malachite, have been found here. Read more here "Malachite Man". William found a rodent scull that started to bereplaced with malachite. Numerous archeologists have claimed that the azurite from this mine has been found in various Anasazi Ruins and the Azurite Pigment has been found in some petroglyphs. There have been various articles written on the formations and minerals coming out of this mine and there are ongoing studies being done on the formations and minerals on this mine at The University of Utah Geology Department, led by Marjorie Chan and now also with one of her students, Kyle Mika. To find additional interesting information on our mine check out the Articles and History section of our website.  For news, new finds and other updates go to our Updates section. 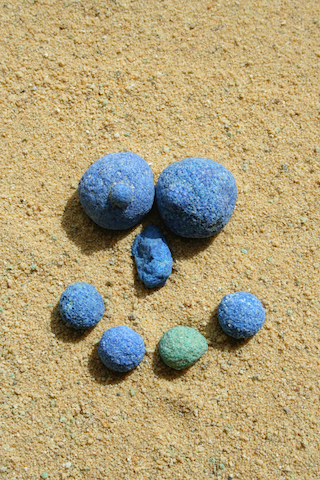